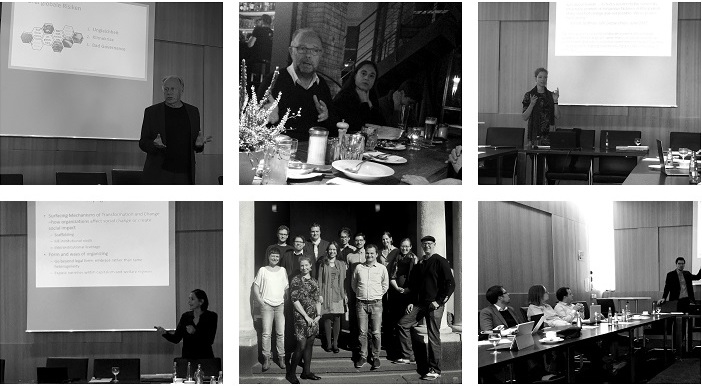 We had our first network meeting in Hamburg on October 4/5, 2018, to bring together research on grand challenges and new forms of organizing. Our members engaged with questions around ecological, social and governance concerns by discussing papers with topics ranging from self-learning algorithms to sanitation in rural India.

We invited two expert scholars to share their views and research on grand challenges. Johanna Mair, professor at the Hertie School of Governance, spoke about combining and bridging rigor and relevance. She also presented findings on the relationship between innovation and scaling, depicting innovation as an investment and scaling as potentially creating value and impact. Juliane Reinecke, professor at King’s College London, presented work on sustainable collective action – in contrast to ceremonial commitment – in the aftermath of the fatal Rana Plaza building collapse. She described the wickedness of the challenge for practitioners and researchers alike, as “one cannot first understand, then solve” and the “formulation of a wicked problem is the problem” (Rittel & Webber, 1973). Scholars in the field then engage with complexities, capture multiple, contradictory accounts of events from diverse respondents, and have to make sense of them.

At the same time, we also extended the conversation to politics and practice. Bernd Ulrich, deputy chief editor of the German newspaper Die Zeit, gave a dinner speech on central problems of our time: climate change as well as shifting global power dynamics and national consequences. His speech was also a plea for action to defend normality radically and to advocate for a transformative instead of incremental politics. Echoing the notion of grand challenges, he noted that the problem for politics is that challenges are conceived as additive instead of as inter-related. Jürgen Trittin, former German minister and current member of federal parliament, addressed similar concerns around inequality, climate change and bad global governance. He emphasized the interconnectedness between various social challenges and identified climate change as the key threat multiplier for these challenges. His talk ended with a plea for a European response strategy.

We finished our two-day meeting reflecting on how research can have more practical relevance to address these central concerns. We will take this up in our second meeting in March in Amsterdam.