Let me share a couple of links related to AI, entrepreneurship, and grand challenges – all in German:

Spoke with Daniela Kolbe, Member of Parliament and Head of the AI ‘Enquete-Commission’, on the present and future of AI. Eloquently moderated by Katharina Heckendorf.

In a new article Stephan Bohn, Nicolas Friederici and myself argue that some platforms become systemically relevant in a crisis, so we need regulation that takes this into account before and during the next crisis. The short piece was published open access in Internet Policy Review here.

Together with Leonhard Dobusch I have published a brief reflection piece in MIT Sloan Management Review on organizational coping-strategies with the Corona crisis from reactive to proactive. We offer four strategies for transforming organizations in such unprecedented times. The article can be found here.

The paper “Unpacking entrepreneurial opportunities: an institutional logics perspective” has just been published in Innovation: Organization & Management. The article can be found here.

Abstract: Taking into account the institutional context, I refine and broaden 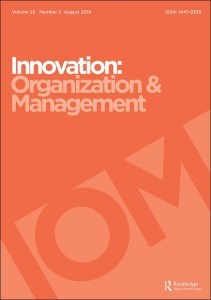